Tyler’s martial art journey started in 2015 when he met Mrs Bryden and Miss Whiley, two of Martial Art World’s instructors, at Portway Primary School Fete. Martial Art World had an interactive martial art stand and Tyler desperately wanted to have a go but felt too shy and self-conscious to approach the instructors. After a while and a lot of encouragement from his mum he did go over and within minutes Tyler was having a great time hitting the pads. The rest is history!

We spoke to Tyler’s mum about the benefits of martial arts: Confidence, self esteem, discipline, focus and personal safety, to name a few. Mrs Trivett explained that she felt she’d contributed to Tyler’s lack of confidence because of her own fears for his health and safety following the death of his older sister the year prior to Tyler’s birth. Mrs Trivett felt that her actions had resulted in a detrimental affect on him and at the age of 8 he was scared of his own shadow.

We asked Tyler and his mum a few questions about his journey and here’s what they had to say:

What is your first memory of Martial Art World?

Tyler: Meeting Mrs Bryden and Miss Whiley at the school fete. I was so nervous but I’m really glad I did go over to meet them.

Mrs Trivett, when did you first start to see improvement in Tyler’s confidence?

Mrs Trivett: The changes happened really quickly. Even by the end of the first session he was much more relaxed. He found it hard to join in on the first session but soon realised that he was missing out on the fun and wanted to get on the floor.

We quickly saw that he was able to interact with his peers much easier than before. He’s always been comfortable talking to adults but found it difficult to form friendships with other children. Now he’s so confident and he’ll have a go at anything!

Tyler, you were presented with your Leadership invite to set the goal of becoming a Black Belt within just a few months of starting your Ninja Ranger training. How did you feel when you were given the invite?

Tyler: I was really excited, it came much sooner than I expected it. I didn’t think I’d done as well as I had so I was over the moon with it.

How did you feel the first time you trained as a Korean Martial Arts Leadership student?

Mrs Trivett: So proud! And he looked so smart.


Cheeky question – Who is your favorite Instructor?


How are you feeling about your Black Belt Grading Sunday?


Mrs Trivett: Excited and anxious. He’s worked so hard on his Black Belt essay too.


What will it mean to you to be presented with a Black Belt?

Tyler: I’ll be over the moon. I have worked towards this for 4 years and will be so happy if I pass.

Mrs Trivett: It’s what I knew he needed at the start of his journey and the benefits have exceeded all expectations. I couldn’t be prouder and I’m looking forward to seeing how proud Tyler will be of himself. I will also feel less guilty about how I over protected him in the past. He’s grown into a happy and confident boy, thanks to his training at Martial Art World.

Tyler, how do you feel your journey at Martial Art World has helped you at school, home and everywhere you go?

Tyler: I wouldn’t be who I am today at school. I’m more confident and I don’t get as frustrated. I was shy and would only speak to a few people. I now have so many friends and I’m confident talking to them.

I can hold eye contact with people now. When I first started I couldn’t look at anyone, except Mrs Bryden. I’ll put my hand up to answer questions now and if I get it wrong – that’s ok!

On Sunday 11th November 2018 Tyler Trivett took his Black Belt Grading. He successfully attained the rank of Black Belt and was awarded a Merit pass. He’s what Tyler had to say about the grading.

I am so pleased. I can’t believe I got a Merit too! I didn’t think I would get through. It was hard and I did get upset because I thought I couldn’t do it. But I did do it and I’m really, really, really, happy.

What does the future hold for Tyler? Well before Tyler took his Black Belt Grading he set the goal to become a 2nd Dan in Korean Martial Arts. Onwards and upwards!

If you would like to know more about our children or family classes please call Martial Art World on 01264 333007 today! 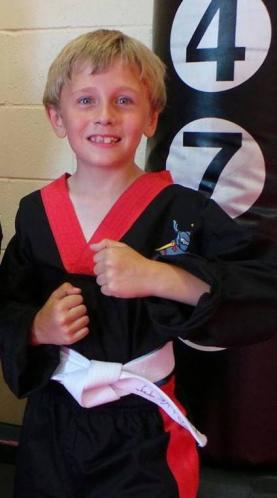 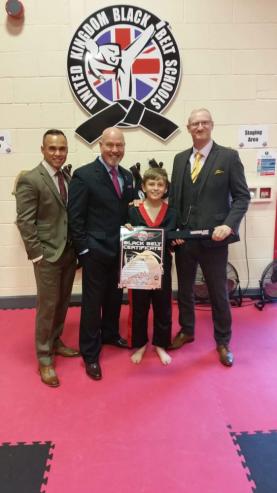 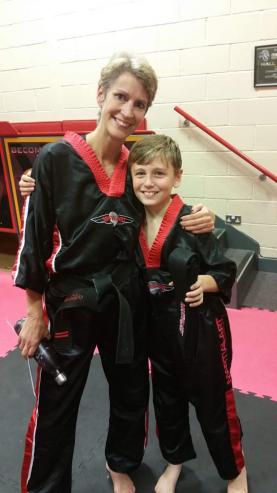